The unfortunate demise of the Tamil writer Sujatha — from the news-channel eulogies, though, you’d think the man was merely a screenwriter, giving shape to the visions of Shankar and Mani Ratnam — has occasioned a steady outpouring of how-I-learnt-to-read-Tamil-with-his-books memories, and while I know from experience that that’s true, I feel no one has zeroed in on why this is so.


After all, there were so many other Tamil writers — the great modernist god that was the early Vairamuthu, say — who were Sujatha’s contemporaries and who were certainly no slouches when it came to a certain felicity of expression that could make any rank newbie fall in rapturous love with the language. But I think what made Sujatha stand apart and speak to so many of us who grew up in the seventies and the eighties was that his writings were instantly appealing to a generation that could understand Tamil and speak Tamil and read Tamil and perhaps even write Tamil — but thought in English.

I’m not just talking about the sci-fi setting of En Iniya Iyandhira and its robo-dog named after the Roman goddess Juno — all far, far removed from the sociopolitical and moralistic scenarios that constituted a lot of the writing in the local magazines of the time — but Sujatha’s Western sensibilities would peek through even his pieces on ancient religious texts.

By “Western” sensibilities, I mean that he could demystify the most arcane of abstractions with the lightest of touches and with the gentlest sense of humour. In other words, he would take his subject seriously without taking himself seriously — and that was refreshing to a generation whose defining characteristic was (a borderline don’t-care-ish) casualness. As an aside, maybe that’s why Mani Ratnam felt the time was ripe for his kind of cinema — because he had in front of him a young audience that wasn’t especially “Indian” when it came to, say, respecting authority figures.

Do you think a filmmaker from an earlier era would have given us the scene from Roja where Arvind Swamy’s mother speaks of his smoking habit as if it were a minor annoyance, perhaps ranking alongside a maidservant who doesn’t show up despite her previous-evening promises to be there first thing in the morning? And maybe that’s why Mani Ratnam worked so extensively with Sujatha, one Western sensibility in complete synchronicity with another. (So also Kamal Hassan, who collaborated with Sujatha on Tamil cinema’s first stab at a Bondian swashbuckler, Vikram.)

Anyway, coming back to Sujatha, here’s what I mean when I talk of his being with it, and with us: In a recent installment of his series in the magazine Kalki — the column was called Vaaram Oru Paasuram (loosely, ‘A Verse A Week’), where, each time, he’d pick a sacred hymn and lay it out in layman terms — he’d chosen a stanza from (the poet-saint) Nammazhvar’s Thiruvaimozhi, one that went Nalkuravum, selvum...

Now, this is what he does. Like that other Tamil instructor so beloved to those of a certain age — Maa. Nannan (from Doordarshan’s Vaazhkai Kalvi), who opened up to us a world of etymology and spelling and pronunciation, armed with nothing more than a piece of chalk, an easel-tilted blackboard and the patience of the ages — Sujatha first breaks down the verse word for word, stopping to intone, for instance, that “nalkuravu” is Old Tamil for “poverty.” Having approached the passage at a building-blocks level, Sujatha now stands back a little and talks about the most immediately apparent meaning, which is Nammazhvar’s contention that the image of the Lord he laid eyes on was an amalgamation of antonyms — poverty and wealth, poison and life-giving nectar, amity and enmity, hell and heaven — and therefore, He is (and is responsible for) everything. And after this is when Sujatha doffs his “Indian” hat — his truly reverential, emotional, subjective “Indian” hat; there’s not a note of condescension or scepticism in this robo-dog creator’s appraisal of the religious text at hand — and looks at things from a decidedly objective, “Western” perspective. He marvels that you could extrapolate this philosophy of God into the utmost extreme of antonyms: namely, if you think He exists, He exists; if you don’t, He doesn’t.

But because of His all-encompassing nature, even His non-existence is proof of His existence. And after this dizzying demonstration of circular reasoning, Sujatha signs his piece off with the Tamil equivalent of “the mind boggles,” capping off what could have been a fuddy-duddy exercise in esoteric academia with a cheeky flourish of hipness. And that’s why he’ll be missed — because, like few before him, he got us in touch with the uncoolest of things in the coolest of ways.

Email ThisBlogThis!Share to TwitterShare to FacebookShare to Pinterest
Labels: சுஜாதா 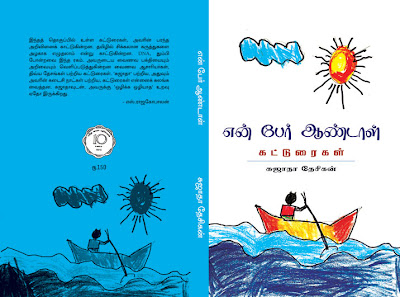 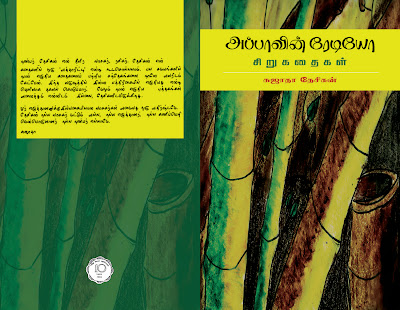